Muscles are susceptible to damage, just like other bodily tissues. Trauma, infections, certain medications or strenuous exercise can cause varying degrees of muscle injury. As the saying goes, “No pain, no gain.” But if you’re over the age of 40, no pain is actually a good thing. If you fi nd yourself in the discomfort zone, your body may be trying to tell you something.

By the age of 40, the body has endured years of wear and tear, and is more susceptible to repetitive stress that can cause injury. While you may feel strong and ready to take on any physical activity, your bones, muscles and joints could be more delicate than you realize. As we age, our musculoskeletal system (i.e., bones, joints, tendons, ligaments and muscles) changes by gradually losing muscle mass, connective tissues (i.e., tendons, ligaments, cartilage and other support structures), flexibility and the resilience that was present at a younger age. And in addition to the loss of elasticity and resilience, low bone density conditions such as osteopenia and osteoporosis can further complicate matters.

Skeletal muscle injuries constitute the majority of sports-related injuries. Injured skeletal muscle undergoes the healing phases of degeneration, inflammation, regeneration and fibrosis (see Figure 12). The body heals damaged tissue fibers by laying down new soft tissue fibers as part of the secondary phase of the inflammatory process. This occurs in bones, muscles, tendons, ligaments, joint capsules and cartilage. Healthy new fibers are essential to healing and pain relief as they replace the torn and damaged ones. 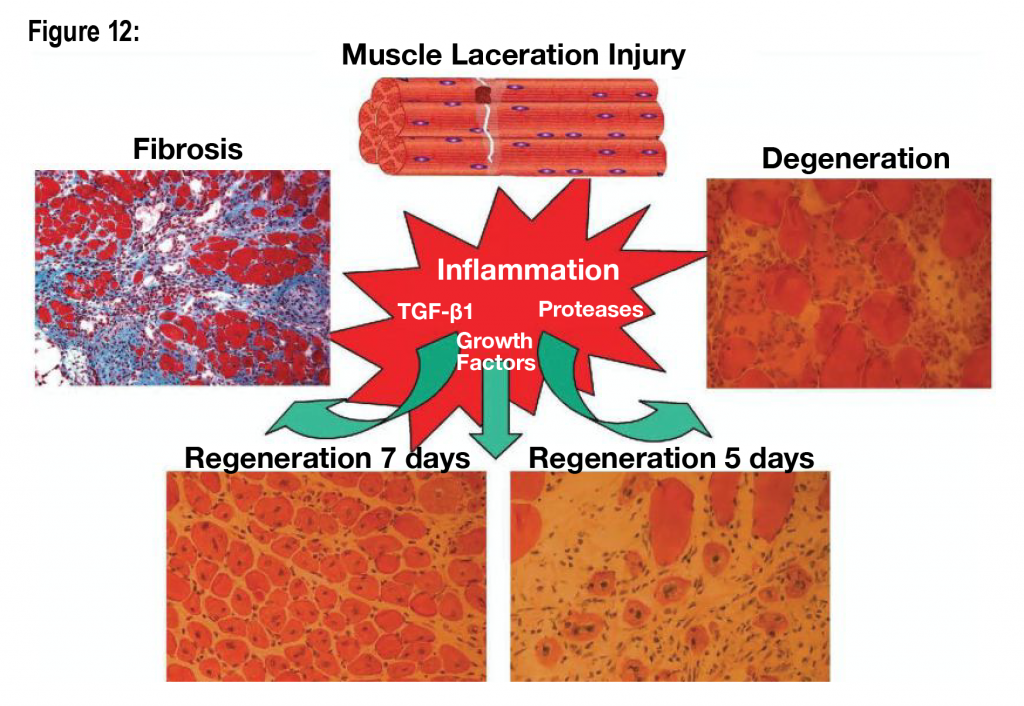 In a pivotal study published in Skeletal Muscle, mdx mice (i.e., mice studied for muscle degeneration and regeneration) were treated with ParActin® for three months (11). ParActin® was shown to promote muscle health and recovery, making it ideal for those engaged in regular fitness routines, hard labor or athletic participation.

Three positive effects were observed in this study, as
follows:

1. ParActin® reduced inflammation in the skeletal muscle via NF-kB inhibition. Prostaglandins (PGEs) have been identified and implicated as major factors in tissue inflammation. Many PGEs are synthesized by cyclooxygenase enzyme and are largely produced during the inflammatory phase after muscle injury. Aspirin and other NSAIDs inhibit PGE synthesis, and are typically recommended to be taken in the first few days after injury to limit inflammation and pain. However, long-term use of these NSAIDs may cause stomach discomfort. Multiple studies have demonstrated the effectiveness of selective COX-2 inhibitors in the reduction of joint and muscle pain with gastrointestinal safety. In the study, supplementation with ParActin® reduced the number of nuclei positive for NF-κB and reduced COX-2 enzyme, which in turn reduces PGE concentrations that causes pain and inflammation (see Figure 13). 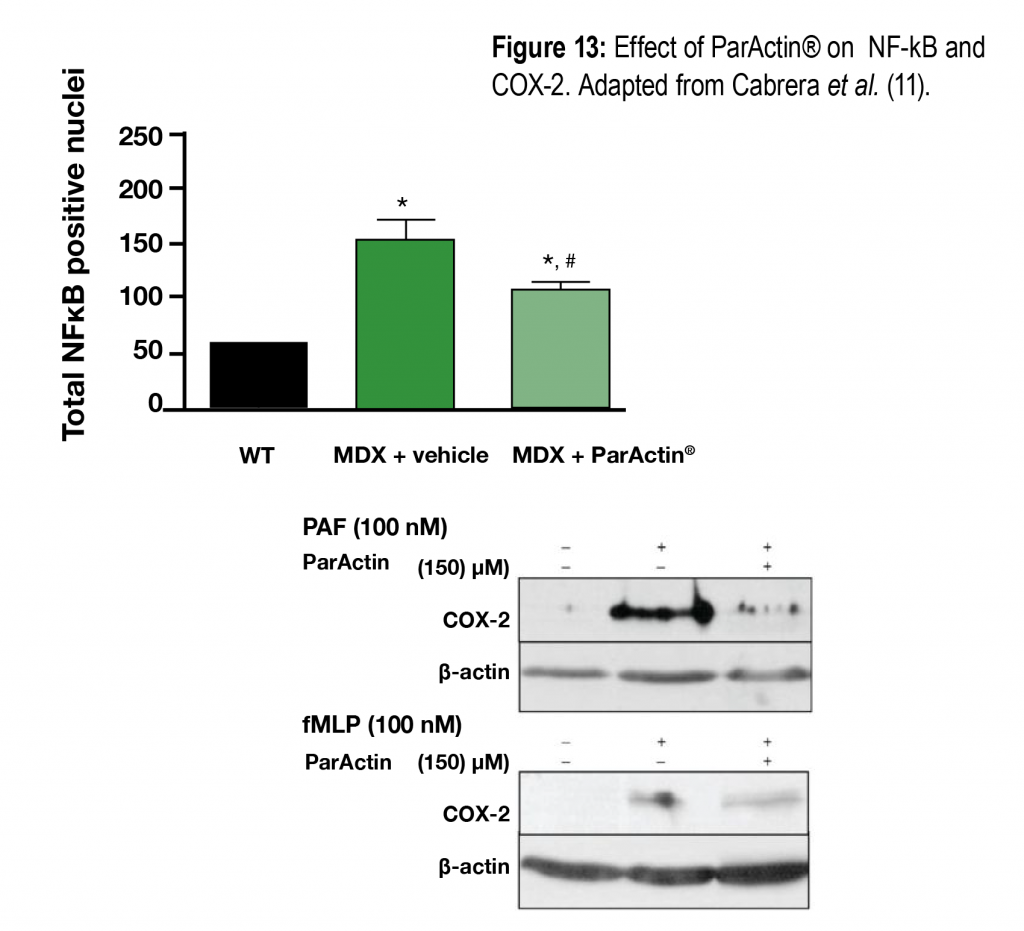 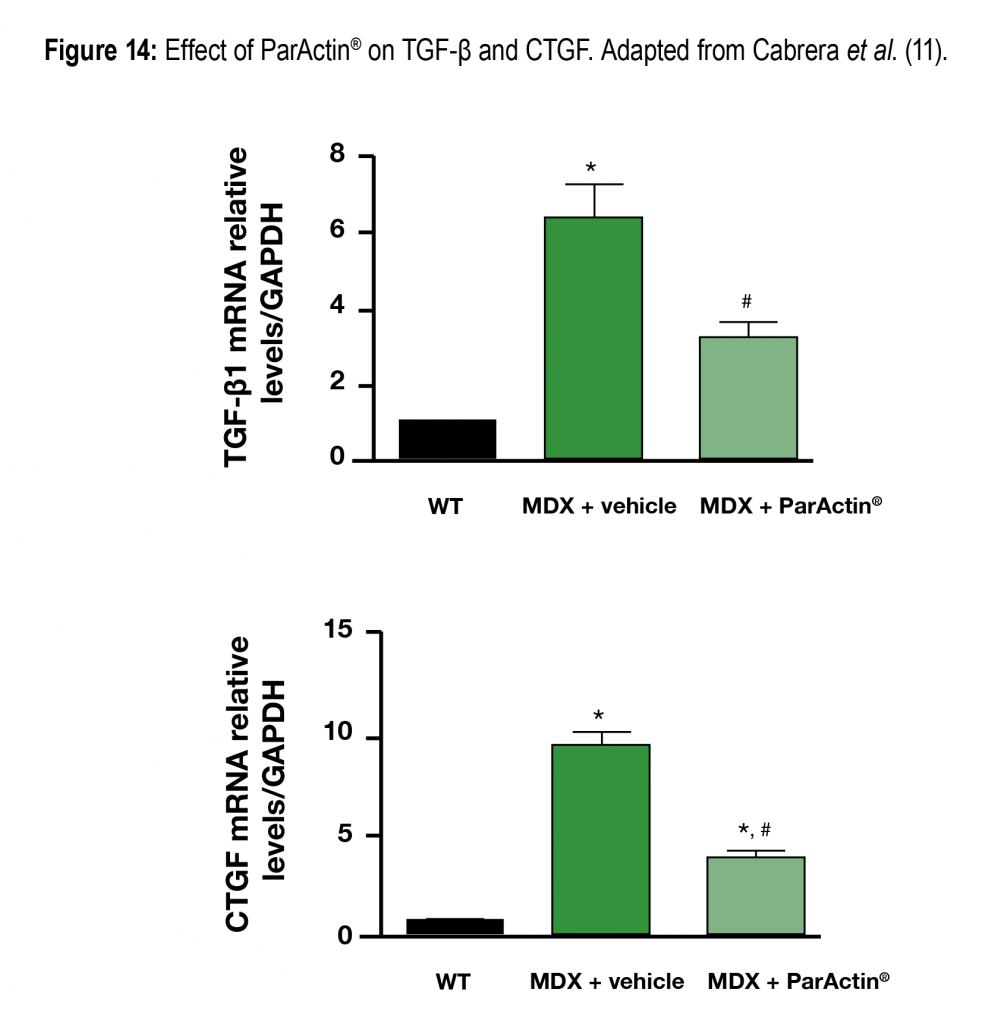 3. ParActin® reduced muscle damage and lowered serum creatine
kinase. Strenuous exercise and overtraining can lead to structural damage to muscle cells, triggering white blood cell activity to increase after muscle soreness, thus leading to the inflammatory response. This has been noted especially in marathon runners whose muscle fibers revealed remarkable damage after both training and marathon competition. The muscle damage causes calcium to leak out of the muscle, further leading to the activation of enzymes that break down cellular proteins in the muscle. These proteins then cause an inflammatory response by the immune system, which then leads to swelling (water retention at the site of injury) and pain.

Creatine kinase (CK) is a type of enzyme found within your muscles,
including the heart and brain. Serum CK indicates the overall health of the muscles within the body and if a serum CK test shows elevated levels, it indicates muscle strain that may have been caused by simply heavy exercise or something as serious as a heart attack. Muscle inflammation and other skeletal muscle damage are associated with an elevated CK level. Depending upon muscle damage severity, some may have CK levels that are as much as 100 times normal levels. Serum CK levels were significantly decreased in ParActin®-treated mdx mice compared with control mdx mice, with an approximately 50% recovery score (see Figure 16). 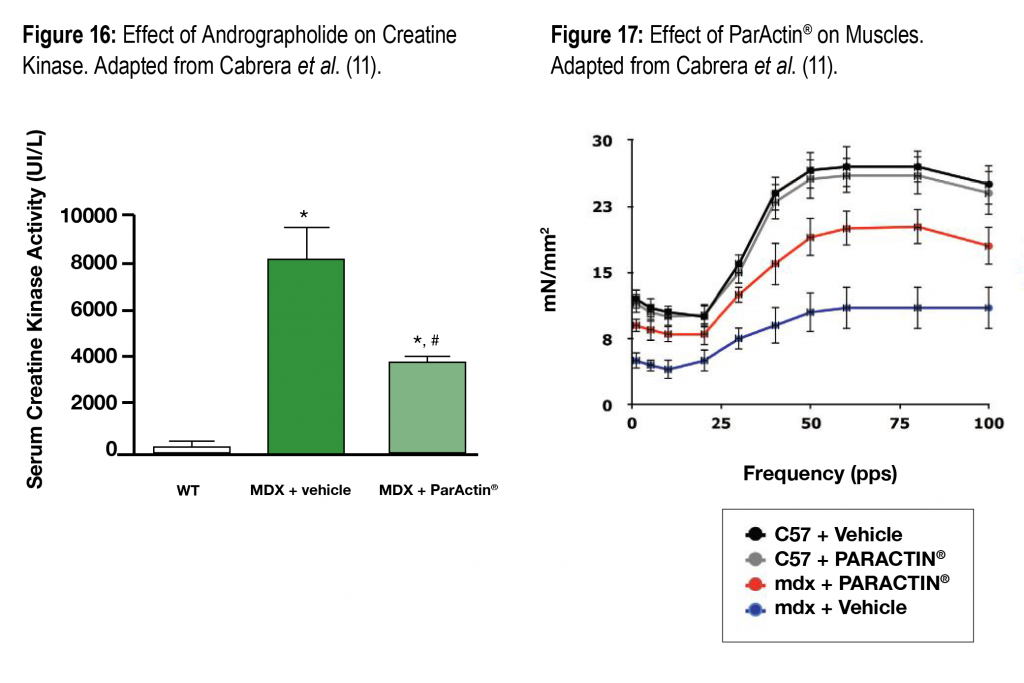 4. ParActin® improved skeletal muscle strength and exercise performance. ParActin®-administrated mdx mice showed improved skeletal muscle strength and enhanced exercise performance. ParActin®-administrated mdx mice showed a significant increase in the generation of isometric force (see Figure 17); an increase twitch and tetanic force in the Tibialis anterior (TA) muscle (in front of the shin); and a significant decrease in the number of fall back in the treadmill running protocol, with a recovery score of 45.5% (see Figure 18). 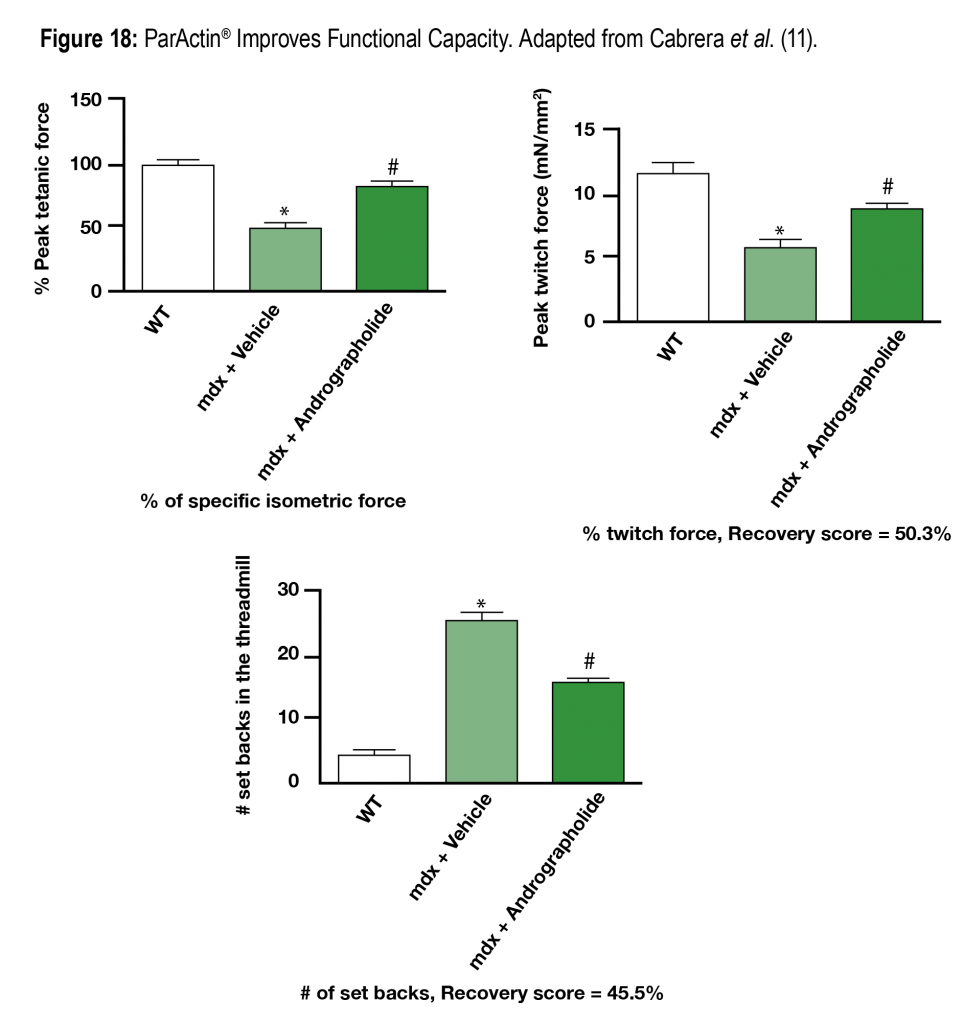