Cancer. Alzheimer’s. Autoimmune diseases. Depression. What do all these
conditions have in common? They have been linked to chronic inflammation. It seems impossible that one thing can be responsible for so many problems, but a growing body of medical research is revealing that long-term, systemic inflammation that occurs when one’s immune system goes into overdrive—sending out cells that attack healthy tissues, along with the unhealthy—may beat the root of many prevalent diseases. The medical and nutraceutical research communities are highly aware how chronic inflammation damages the human organism in many ways. In vivo research has outlined and clarified the cascade of reactions causing unhealthy inflammation.

Inflammation, however, is not an unjustified biological response. It is critical for our survival and is the body’s natural mechanism to defend against a diverse variety of pathogens including bacteria, viruses, fungi, tumors and other harmful agents (e.g., chemicals, radiation, burns and wounds). Inflammation is a complex reaction of the body in response to cellular injury (such as a bruise). It is marked by tissue swelling, capillary dilation, antihistamine activity, redness, heat and pain. It serves as a mechanism initiating the elimination of noxious agents and of damaged tissue (see Figure 1). 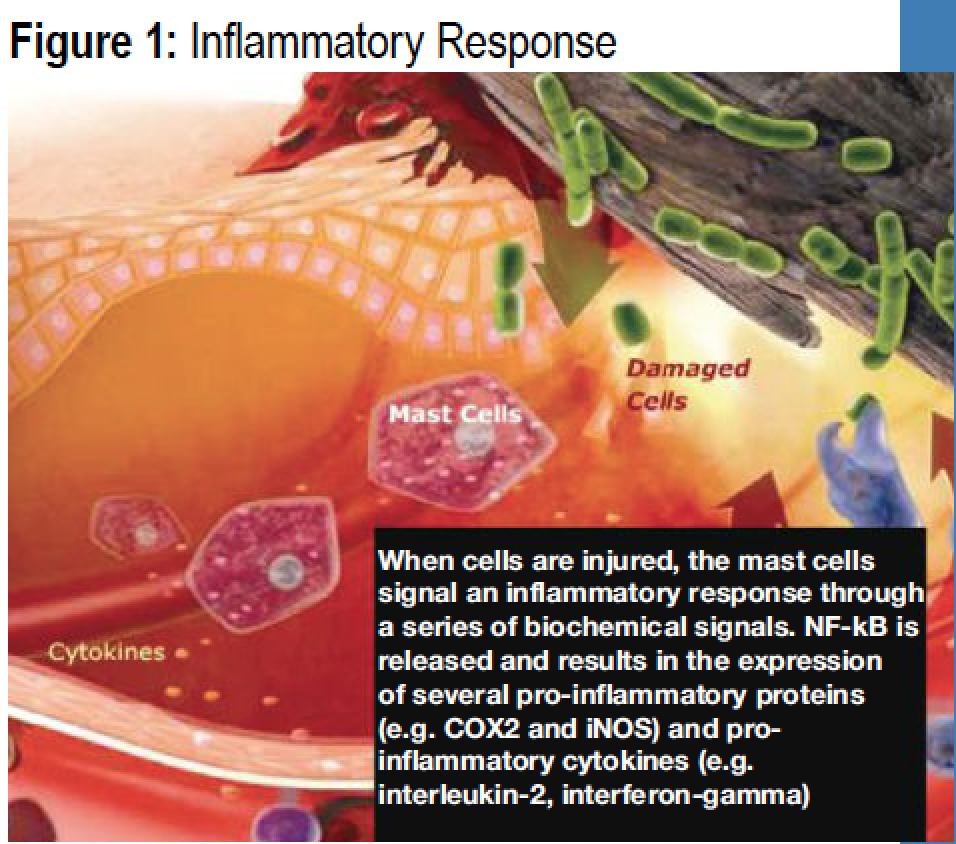 Implicated in the onset of 95% of all cancers is a common but under-recognized molecule most people have never heard of: nuclear factor-kappaB (NFkB). Emerging research validates the danger it poses to maturing individuals.

NF-kB is a protein that acts as a switch to turn inflammation on and off in the body. Scientists describe NF-kB as a “smoke sensor” that detects dangerous threats like free radicals and infectious agents. In response to these threats, NF-kB “turns on” genes that produce inflammation. As we age, NF-kB expression in the body increases, provoking widespread chronic inflammation and setting the stage for diseases ranging from atherosclerosis and diabetes to Alzheimer’s. Evidence from recent research suggests that by inhibiting NF-kB, a wide range of diseases and conditions in which inflammation plays a critical role can be treated (see Figure 2). 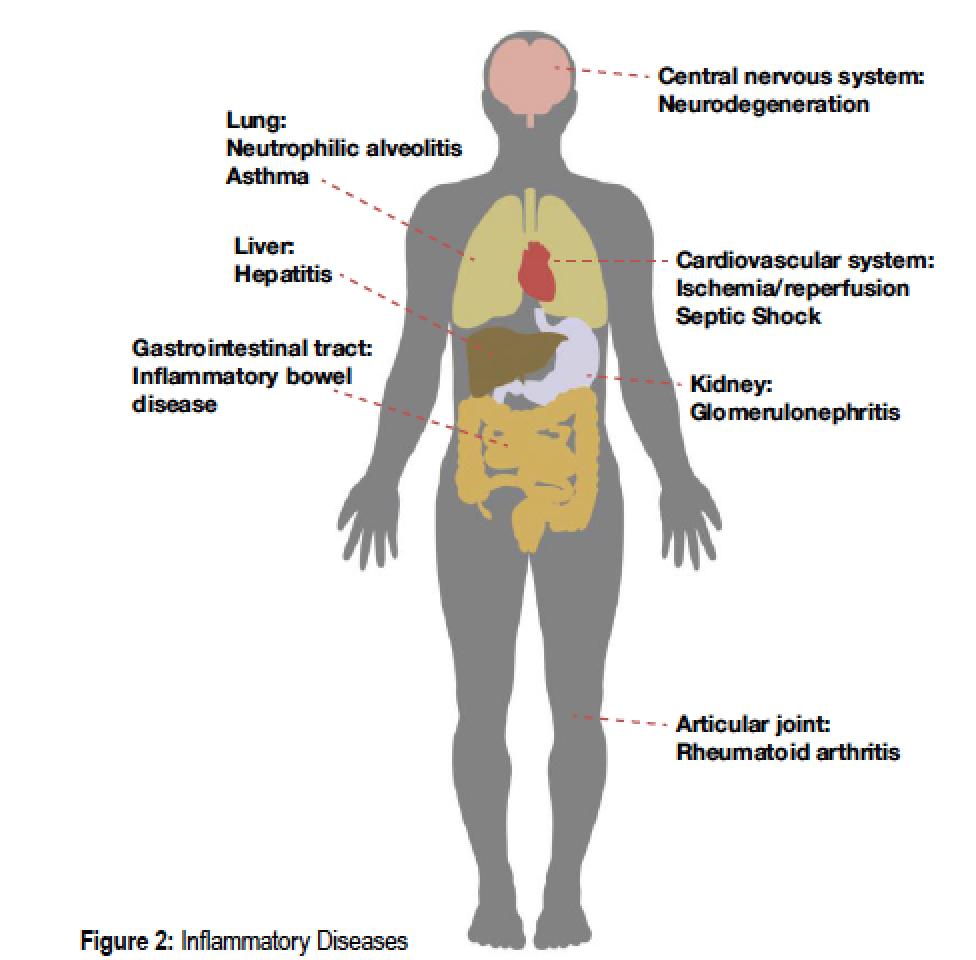 These naturally occurring phytochemicals in the Andrographis paniculata plant have been shown by researchers to have beneficial actions in supporting healthy joints, bones and muscles; this is so important in today’s active lifestyle. ParActin® was awarded U.S. Patent #8,084,495 B2 (Dec. 27, 2011), titled, “Composition of Labdane Diterpenes Extracted from Andrographis paniculata, Useful for the Treatment of Autoimmune Diseases, and Alzheimer’s Disease by Activation for PPAR-Gamma Receptors.” 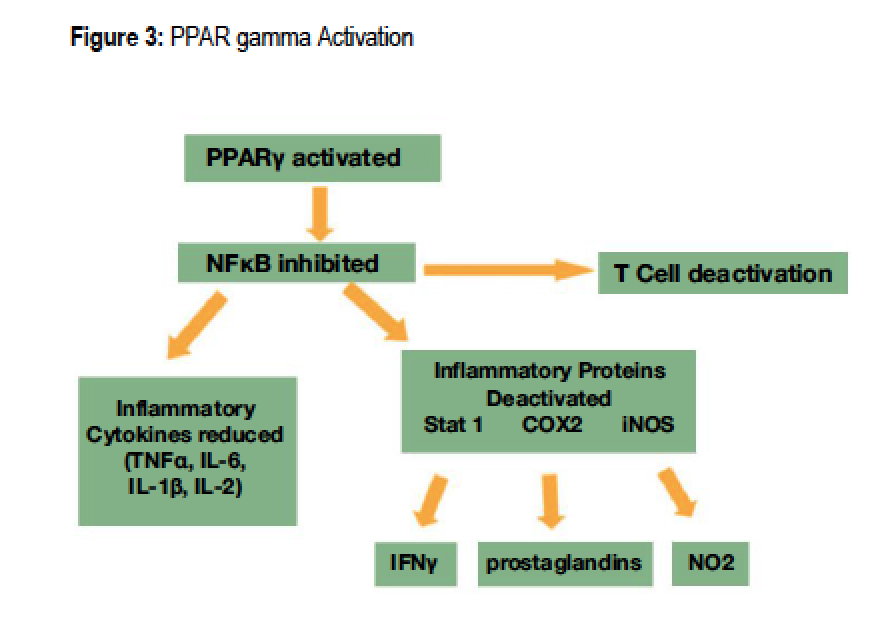 Andrographolide is a labdane diterpene isolated from the
leaves of Andrographis paniculata, a Chinese herbal medicine
used for the treatment of viral infections and inflammatory
diseases (Coon & Ernst, 2004). Andrographolide is known to
exert several anti-inflammatory actions, including inhibition of
intercellular adhesion molecule-1 expression in monocytes
activated by tumor necrosis factor-a (Habtemariam, 1998),
suppression of inducible nitric oxide synthetase (iNOS)
expression in RAW264.7 cells stimulated by lipopolysaccharide
(LPS) and interferon-g (Chiou et al., 1998; 2000) and
inhibition of microglial activation through inhibition of iNOS
and cyclooxygenase-2 (COX-2) expression (Wang et al., 2004).
In neutrophils, andrographolide reduces adhesion induced by
N-formyl-methionyl-leucyl-phenylalanine (fMLP) (Shen et al.,
2000), and reactive oxygen species production and Mac-1 expression induced by phorbol myristate acetate and fMLP
(Shen et al., 2002).
Nuclear factor kappaB (NF-kB) is a transcription factor
found in a great variety of immune cells participating in the
regulation of genes involved in cellular and physiological
process, such as growth and apoptosis, and has an important
role in the inflammatory and immune response by inducing the
transcription of proinflammatory genes (Baeuerle & Baltimore,
1996). For instance, the proinflammatory mediators
such as intercellular adhesion molecule-1, iNOS and COX-2
are proteins regulated by the transcription factor NF-kB
(Barnes & Karin, 1997; Roebuck & Finnegan, 1999). Activation
of NF-kB involves the phosphorylation of specific
inhibitory factors (IkBa, IkBb and IkBe) by I-kappa kinase
(IKK)1, IKK2 and NF-kB essential modulator (Karin &
Delhase, 2000). Phosphorylated IkB is rapidly degraded in
response to stimuli (Simeonidis et al., 1999). This degradation
allows the resultant free NF-kB dimer to translocate into the
nucleus and induces gene transcription (Baldwin, 1996; Ghosh et al., 1998). Activation of NF-kB has an important
role in neutrophils, regulating apoptosis (Ward et al., 1999),
production of interleukin-1, -6, -8 and adhesion molecules
(Baeuerle & Henkel, 1994) and expression of COX-2 (Kim
et al., 2001).
In neutrophils, NF-kB is activated by proinflammatory
stimulus such as, fMLP and platelet-activating factor (PAF)
(McDonald et al., 1997). fMLP and PAF are factors that
mediate diverse neutrophil functions, such as chemotaxis,
superoxide production and COX-2 expression. These factors
bind to G-protein-coupled receptors, which induce mitogenactivated
protein kinase (MAPK) activation (Chao & Olson,
1993; Ishii & Shimizu, 2000). PAF activates p38 and
extracellular signal-regulated protein kinase (ERK)1/2 MAPK
in neutrophils (Nick et al., 1997; Hidalgo et al., 2004; Khreiss
et al., 2004). On the other hand, it has been demonstrated that
fMLP activates mainly ERK1/2 protein in human neutrophils
(Nick et al., 1997).
Several natural compounds have been reported to reduce
NF-kB activation (Bremner & Heinrich, 2002) and in the
present study, using neutrophil-like dimethylsulfoxide
(DMSO) differentiated HL-60 cells, as a cellular model of
neutrophils (Santos-beneit & Mollinedo, 2000), we have shown
that NF-kB activation by PAF and fMLP is strongly inhibited
by andrographolide, an effect that is mediated by andrographolide
blocking the binding of NF-kB to DNA.

Andrographolide reduces IL-2 production in T-cells by interfering with NFAT and MAPK activation. María D. Carretta a, Pablo Alarcón a, Evelyn Jara a, Loreto Solis a, Juan L. Hancke a, Ilona I. Concha b, María A. Hidalgo a, Rafael A. Burgos a,⁎